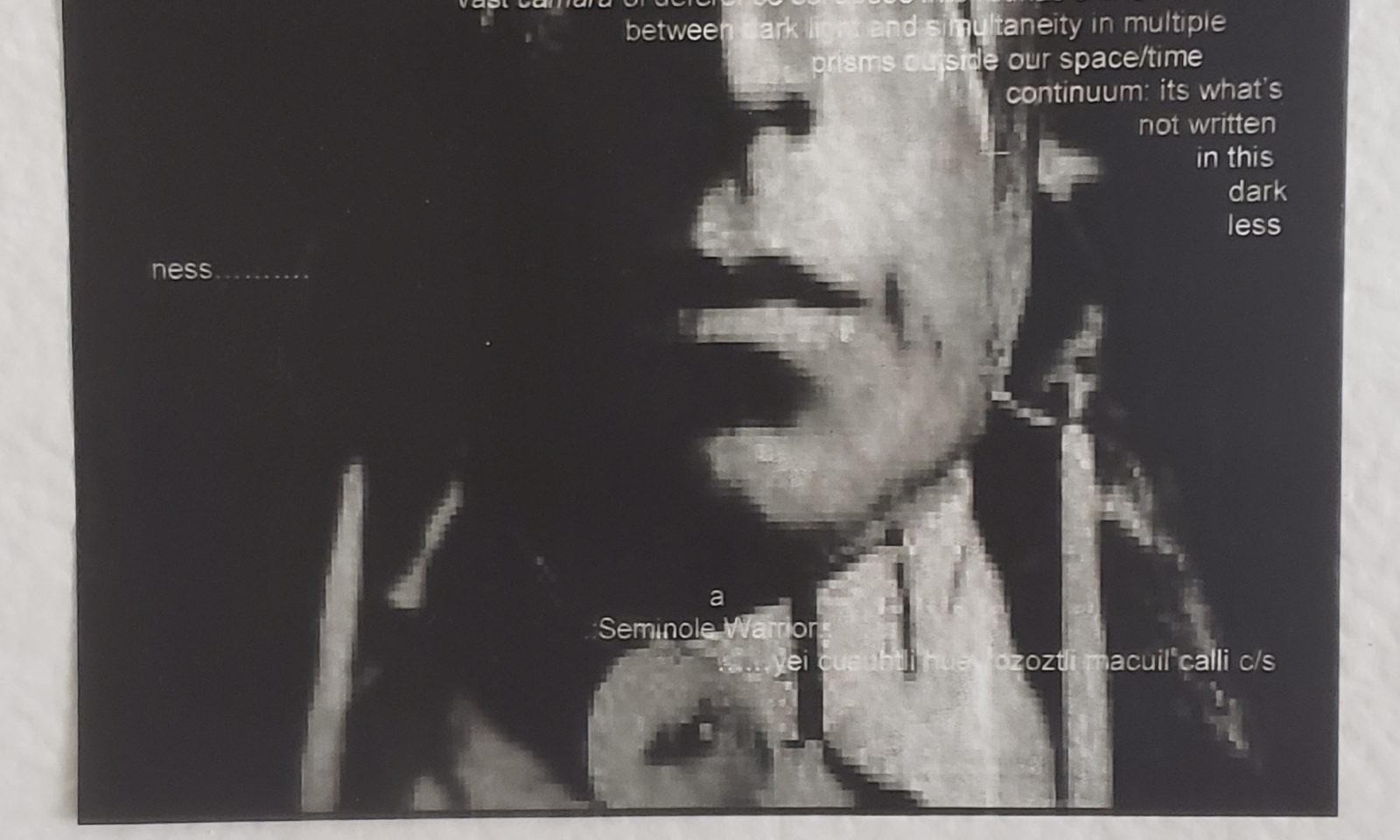 The present poetry exhibit proposals are both an interactive/multidisciplinary and a multiphase comprehensive exposé on Mesoamerican lore and more specifically on a pre-Columbian notion of time. Here, there would be three simultaneous and concurrent exhibits that center on concrete poetry. The first exhibit is as an installation in 36in by 48in and/or 8.5 by 11 paper size plastic transparencies to be in two co-centric circles. Two manuscripts will be utilized, specifically Death Throws and Desert Sands (i.e. 180 plates or plastic transparencies). This 1st exhibit is titled Transparencies in Time: Cuahpohualli embedded in ethnopoetic language poetry:. Additionally there will be an audio recording of poems in a loop running during exhibit. Along with poetry circles for dialogue/interactive collaboration for all viewing the exhibit for all those that would like to share their experience. Thus, there will be continuous dialogue circles on topics that arise from being in the 1st gallery. In the 2nd gallery within this same proposal it’s titled Cyclones in the DNA2: Double Helix in Haiku Transparencies outside [Space] Time. Utilizing the innate potency of the ancient Japanese form of the haiku interwoven with the Cuahpohulli the objective is to give an interactive poetry exhibit (i.e. using five distinctly unique poetry manuscripts; Oye Macehual, Dark Light Between Shadows, Day(s) of Creation, Chronology and Written in Sky/Frost/Mist/Sight). The poems will be in individual plastic transparencies, which will be framed and installed in the shape of the double helix, which is the most elemental molecular structure of our DNA. Specifically, each individual poem will be a frame that will contour the shape of the double helix –frame by frame (i.e. with a total of 284 frames/transparencies to be utilized as plates). The first two poetry ms will be used as the lateral axis that will be vertical and the other three will form the adjoining cells that are parallel to the horizontal center plastic transparencies. Then these will be twisted to assimilate a replica of our double helix. Given, the advantage of the malleable nature of the transparencies these will be shaped and formed to fit the prerequisite. In this the historical sources are as follows given their singular thematic reference point of each specific manuscript. Namely the Cuahpohualli, the Maya Long Count, the Hagakure, and Zheng Xie (1693 -1765), also known by the pen–name Banqiao in Complete Works of Banqiao. In the end the aim is to show the youth that literacy has no barriers and/or creativity is innate in our DNA and thus infinite in its potential that’s exponentially refracted heretofore. In the end poets breathe life extracted from the ether and/or other realms shower into rainbows. In the 3rd gallery titled Dream Images: TransparenXcies in Pyramid Shifts: 3D exhibit. Utilizing, this ms aforementioned above it’s an installation of poems in the shape of a pyramid that shifts into 3–dimensions. Panels will be installed were the plastic transparencies will be held up, in three panels to assimilate the shift into other “dimensions”. Here, throughout the same motifs pervade; the Count of Days, Mesoamerican lore, concrete poetry and most importantly to gather the widest audience possible to engage in an open dialogue with all elements of the community at large. In any event what is sought is a civil dialogue on poetics and its innate power. Its sole intent is to have the youth see through means of the exhibit that they are culture.