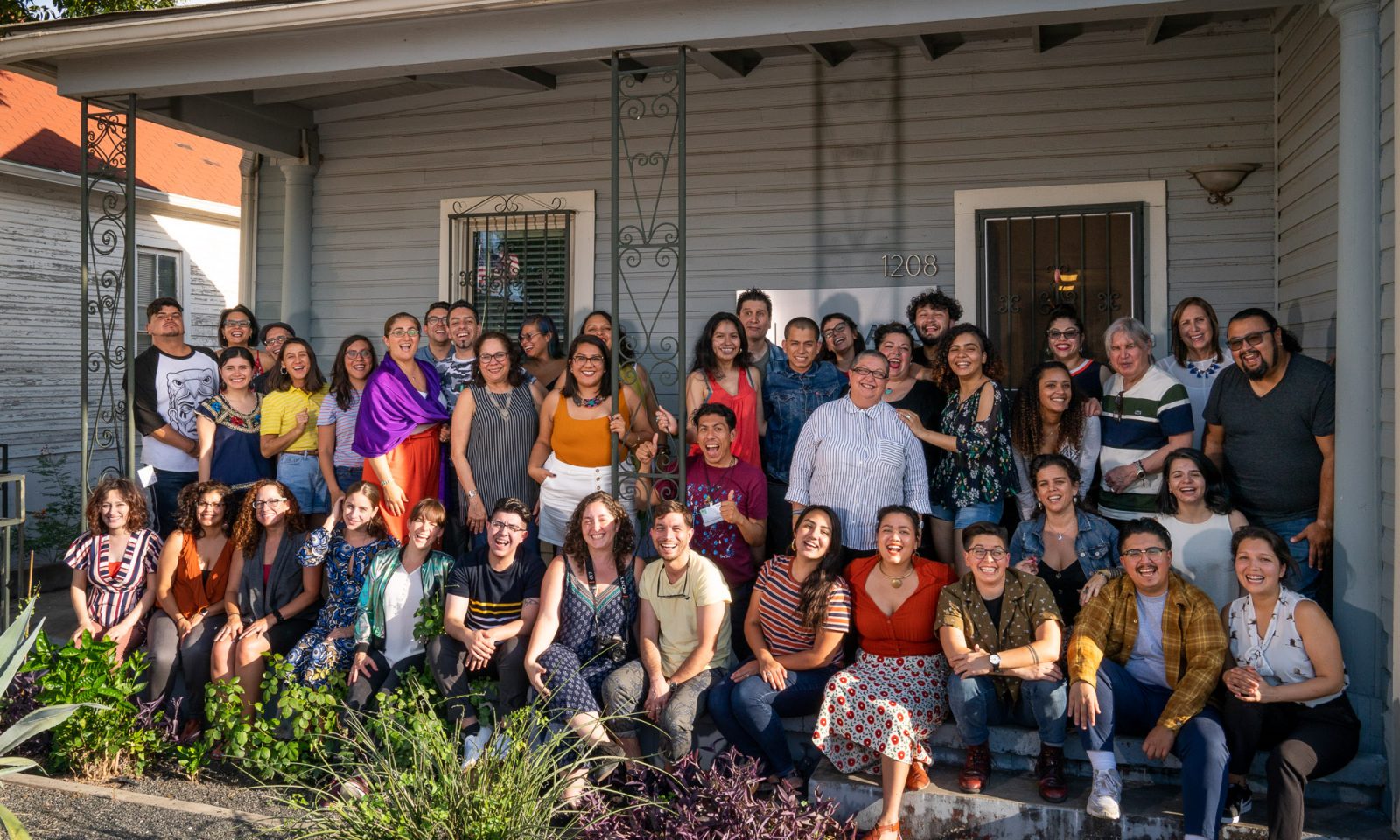 On Monday, July 13, 2020, sixteen artists and cultural workers from across the United States and Puerto Rico will log on to the first online edition of the NALAC Leadership Institute, a weeklong intensive professional development program produced for and by Latinx arts workers.

This year’s edition marks the twentieth anniversary of the annual flagship leadership program. This year’s cohort of Fellows represent communities in Connecticut, the District of Columbia, Illinois, Maryland, New Mexico, New York, Pennsylvania, Puerto Rico and Texas. The participants work in a variety of creative disciplines, working both independently and within cultural institutions.

They’ll tune into sessions led by faculty including Rosalba Rolón from Pregones/PRTT in the Bronx, Dr. Maribel Álvarez from the Southwest Folklife Alliance and the Southwest Center at the University of Arizona, and Abel López from GALA Hispanic Theatre in Washington, D.C.

“Two decades of the NLI has solidified a broad network of arts professionals within the Latinx field and beyond. It is a huge pleasure to work alongside a Faculty with such a range of expertise and commitment to leadership development at all levels,” said Rosalba Rolón, who also sits on the NALAC Board.

Rolón and López have worked together since its founding in 2001 and Álvarez joined the faculty in 2004. The core group has collaborated on the program for over fifteen years, in collaboration with numerous visiting cultural workers.

This year, arts consultant Evonne Gallardo and writer and BAAD! co-founder Charles Rice-Gonzalez will also lead select sessions. As he has done for many years at the institute, Chicano art scholar Dr. Tomás Ybarra-Frausto will present his much-loved talk “No Llegamos Ayer Y No Nos Vamos Mañana.”

In its new online format, Fellows will participate in four hours of daily class time for five days. Session topics include a survey of the Latinx arts field, board development, vision and mission, strategic thinking, and financial management.

While the organizing team will not be able to replicate the traditional NLI experience infused with some of the art, cuisines and communities of San Antonio, this year’s program aims to build a sense of online community for the cohort.

Fellows will connect with one another through virtual breakout rooms for fellow to fellow charlas, one-on-one consultations with faculty, and interactive online programming after class is over for the day. Milteri Tucker Concepcion, founder of Bombazo Dance Co will lead a Bomba movement class for the group. The artist received a NALAC Fund for the Arts grant in 2018 to support the Crowns project highlighting the history and meaning of head wraps in the African and Caribbean Diaspora.

“The faculty, NALAC team, and supporters who believe in the vision and goals of the NLI, created a unique and safe place to nurture and support over 450 alumni. We thank the alumni for their continued investments and contributions to the Latinx arts field,” said María López de León, NALAC President & CEO. “The NALAC Leadership Institute continues to expand the vision of supporting Latinx arts leaders and building a leadership pipeline to transform and shape the future of arts and cultures.”

“The NALAC Leadership Institute has surpassed the hopes and dreams of its genesis 20 years ago, and I thank the family of partners that have been an essential part of its success,” said López de León.

The NALAC Leadership Institute is made possible by the Doris Duke Charitable Foundation, Ford Foundation, Southwest Airlines, National Endowment on the Arts, the Texas Commission on the Arts, individual donors and volunteers.

Melissa Beatriz is a Uruguayan-American documentary filmmaker, community journalist, cultural producer, and researcher based in Philadelphia. Her projects focus on the intersection of the arts, social change, racial/immigrant justice, and policy. Since 2010, she has collaborated with organizations and artists that advocate for social justice, with roles in communications, development, outreach, event production, teaching, and film production. Melissa is a 2019 Leeway Transformation Award recipient. She has received grant support from the Doc Society Good Pitch Local Philadelphia Grant (2019), and the Leeway Foundation Art & Change (2019, 2012) and Window of Opportunity (2017) grants.

Oriana E. Gonzales is Curatorial Assistant for Latinx Studies at the National Museum of African American History and Culture. She holds an MA in Latino, Caribbean, and Africana Studies from the CUNY Graduate Center and a BA in Latin American Studies and Art History from Purchase College. She has worked with El Museo Del Barrio, the Museum of Modern Art, and the Loisaida Center, among other institutions. She was a 2018 Smithsonian Latino Museum Studies Fellow, a 2017 Museum Education Practicum participant at the Studio Museum in Harlem. She is an Editorial Assistant at Small Axe Journal (since 2018).

Marcela C. Guerrero is Assistant Curator at the Whitney Museum of American Art. Recently, she was part of the curatorial team that organized Vida Americana: Mexican Muralists Remake American Art, 1925-1945. In 2018, Guerrero curated Pacha, Llaqta, Wasichay: Indigenous Space, Modern Architecture. From 2014 to 2017, she worked as Curatorial Fellow at the Hammer Museum in Los Angeles and prior to that, from 2010 to 2013, she worked at the Museum of Fine Arts, Houston (MFAH). Born and raised in Puerto Rico, Guerrero holds a Ph.D. in Art History from the University of Wisconsin-Madison.

Nansi Guevara is a border artist and activist who grew up in Laredo, Texas. She studied Design at the University of Texas at Austin, then moved to Mexico City with a Fulbright Student Fellowship. In 2013, she graduated with a Master’s in Arts in Education from the Harvard Graduate School of Education. In 2016, she co-founded Las Imaginistas, a group of socially engaged artists, who were awarded a Blade of Grass Fellowship and an Artplace America Grant. She has spent the last 10 years working as a community artist in Laredo, Austin, Mexico City,  Boston, and Brownsville.

Yeiry Guevara is a writer, translator, multimedia artist and arts administrator. Her mediums range from bilingual zines, embroidery, and film. Her work has been published in Texas Monthly, VICE, Remezcla with several gallery exhibitions in NYC and TX. She has presented at national platforms such as L.A. Times Festival of Books, L.A. Zine Fest, Columbia University, Association of Writers & Writing Programs (AWP) Conference, and Twitter NYC Headquarters. After many years in NYC, Guevara currently lives in Houston, TX where she is the Grants Manager for Houston Arts Alliance, the City of Houston’s designated local arts and culture agency.

Crystal Manich has directed over sixty-five full scale productions in opera, plays, and musical theatre in the United States, Argentina, and Australia. Recent: Daniel Catán’s Spanish language operatic adaptation of the film “Il Postino”; Michael John LaChiusa’s musical “Bernarda Alba”; the world premiere of “Return to Sender”, about Mexican immigration. Crystal was a Co-Founding Artistic Director of Opera Omnia in New York, was Assistant Artistic Director with Cirque du Soleil’s “Quidam” in Brazil, and was Artistic Director of Mill City Summer Opera in Minneapolis. She holds a BFA in Drama and a Masters in Arts Management from Carnegie Mellon University.

Erica Marin has a B.F.A in Art/Museum Conservation and an M.A. History/Public History. Before her formal education, she was an art maker and her work primarily focused on identity and memory. Marin became interested in the curatorial process because she realized that so much of what she wanted to say involves a multidisciplinary approach. Marin’s job duties at the El Paso Museum of History also include overseeing the stewardship of the permanent collection and exhibition development. Together, with the museum team she develops ideas and themes for exhibition and educational programming. Her role requires me to wear many hats and to constantly exercise my creativity and organizational talents.

Allina Migoni is a reference librarian at the Library of Congress, American Folklife Center. In 2016, she earned her M.L.I.S. and M.A. in Latin American Studies from UCLA. Her research interests include Chicanx and Latin American art, and human rights in the archive. Allina served as President of the Hispanic Cultural Society at the Library of Congress 2018-2020. She is Member-At-Large for REFORMA, The National Association to Promote Library and Information Services to Latinos and the Spanish Speaking. Allina serves on the National Advisory Board for the national online portal “Rhizomes: Mexican American Art Since 1848.”

Lynnette Miranda is the Program Director at United States Artists, a national funding nonprofit in Chicago, IL. She studies the economy of individual artists and is committed to the wellbeing of our country’s culture makers. As an art worker, curator, and writer, she strives to build better models of art organizing through critical, alternative practices that promote equity and access. Lynnette is passionate about centering artists and practitioners of color, not only through representation but through building support systems and redistributing resources. She has held roles at leading arts institutions including Creative Time, ART21, and the Art Institute of Chicago.

Born and raised in Bogotá, Colombia, Nico Rodriguez Melo is a curator and arts administrator working in the creation and strengthening of art-related strategies that, combined with other disciplines, allow the empowerment of communities. In 2011 he co-founded the nonprofit organization 4-18 and currently serves as co-director, exploring the potential of curatorial practices, site-specific interventions, and publications as pedagogical devices and change ignitors.Rodriguez Melo has resided in the US since 2016, where he has continued to work in the intersection of artistic practices and social change at the School of the Art Institute of Chicago and the Maryland Institute College of Art.

Rambo Salinas is a self-educated music historian from Alice, Texas. Once relocated to Minneapolis in 2001, Salinas curated dance nights and started digging deeper into Chicano music history, collecting records and researching labels. He worked at The Bedlam Theatre, managing sound and teaching youth to run programs. He returned to Texas in 2012 to find living artists, collect stories and archive the music. Salinas has spent over a decade traveling with records, sharing knowledge and the sounds of South Texas through radio shows and dance nights. He currently manages Friends of Sound which specializes in Texas and Latino music.

Luna Olavarría Gallegos is a storyteller, researcher, technologist, and archivist. She is the founder and director of multimedia project AfroRazones and in 2016 she co-founded Art Exit, the online platform that maps power in the art world. She also co-produced Re:Construcción, the exhibition which archived the long-lasting affects of the Salvadoran civil war. Her written pieces on music, race and technology have been published in outlets including The Guardian, The FADER and La Liga. As a curator, she has organized panels, showcases and film festivals that highlight the work of Black and Latin American artists.

Marlène Ramírez-Cancio is Associate Director, Arts & Media, at NYU’s Hemispheric Institute. Hemi connects artists, scholars, and activists, forging spaces of creative inquiry and critical practice that enliven struggles for justice in the Americas. She initiated and directs EMERGENYC, Hemi’s emerging artist program, and the yearly Artist Residencies for local NYC artists. She has produced seven large-scale international Encuentros and curates Hemi’s Digital Video Library. Born and raised in Puerto Rico, Marlène is also co-founder of Fulana, a Latina satire collective collective whose videos have been shown internationally and whose members teach satire and parody as critical tools for artivists.

Soldanela Rivera is a communications executive and producer spanning the fields of dance, film, television, music, theater, and education, and has worked with emerging, established, and world-renowned figures. Soldanela produces Notes From A Native Daughter, an audio blog about arts, culture, and society with figures from the Pan-American experience. She self-published “View For Death” in 2018, and is currently Director of Presidential Strategic Initiatives at Hostos Community College of The City University of New York. Soldanela earned a B.A. from Sarah Lawrence College with a concentration in dance and an M.A. from Teachers College, Columbia University in Arts Administration.

Cievel Xicohtencatl is a multidisciplinary artist that lives and works in New York and Mexico. As a first generation Mexican American, her personal work often explores themes of indigenous identity and culture. From illustration to puppetry; working through a diversity of mediums has allowed her to explore different platforms through which her work can engage with a public.