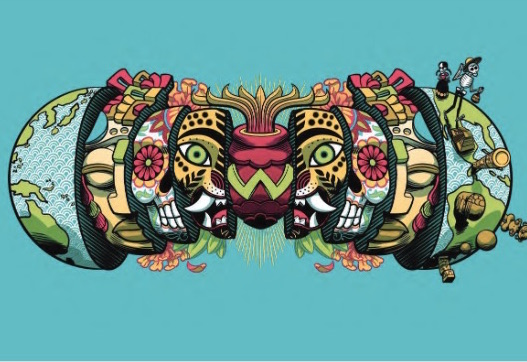 This special issue seeks to explore distinctive approaches to the understanding of Latinx Comics.

We especially invite essays that aim to share tools, methods and insights for teaching Latinx comics in K-12 and university classrooms. We also welcome non-essay forms of disseminating knowledge, including pedagogically oriented comics.

Articles: Possible topics include but are not limited to:

Please put Submission for 21st Century Approaches to Latinx Comics in the subject line of the email.

All scholarly articles must be written in English or Spanish and should be between 2,000-6,000 words, double-spaced, 12 point font following the most recent MLA Style Manual. Please use End Notes rather than Footnotes and place page numbers in the upper right- hand corner. Scholarly articles under consideration should not be submitted elsewhere. Creative submissions may be written in Spanish, English or Spanglish.

Please include the following information in the body of the email:

Full name
Institutional Affiliation
Telephone number
Email address
Regular mail address
Title of the submission
A brief biography to be included with publication should your submission be selected.
Please make sure that the actual manuscript bears no reference to the author’s name or institution.

Label Me Latina/o is an online, refereed international e-journal that focuses on Latina/o/x Literary Production in the twentieth and twenty-first centuries. The journal invites scholarly essays focusing on these writers for its biannual publication. Label Me Latina/o also publishes creative literary pieces whose authors self-define as Latina, Latino or Latinx regardless of thematic content. Interviews of Latino, Latina or Latinx authors will also be considered. The Co-Directors will publish creative works and interviews in English, Spanish or Spanglish whereas analytical essays should be written in English or Spanish.

Label Me Latina/o is an academic journal and as such follows the parameters of definitions set by the academic community. In that community when we refer to Latina/o/x Literature, we are referring to writers of Latin American heritage that live and write in the United States. These can be first generation Latina/o/x or fifth but they live and work here in the U.S. Some of these writers write in Spanish, others write in Spanglish like the Nuyorican poets and many of them write in English with a little Spanish thrown in (or not). Scholarly essays should address the work of these writers. The authors of these scholarly essays may be of any ethnicity or nationality. Creative works should be authored by writers who self-define as Latina/o/x and live and write in the United States.

Label Me Latina/o is indexed by the MLA International Bibliography, is listed in the MLA Directory of Periodicals and is a member of Latinoamericana: Asociación de revistas académicas en Humanidades y Ciencias Sociales. Our articles are discoverable on EBSCOhost research databases. ISSN 2333-4584

Frederick Luis Aldama, aka Professor Latinx, is the Jacob & Frances Sanger Mossiker Chair in the Humanities at the University of Texas, Austin, where he is also founder and director of the Latinx Pop Lab. He is an award-winning author, co-author, editor, and coeditor of over 48 books, including an Eisner for Latinx Superheroes in Mainstream Comics. He is author of several children’s books, including The Adventures of Chupacabra Charlie (published in English and Spanish) and Con Papá / With Papá as well as co-creator of the animation short, Carlitos Chupacabra, currently on a world film festival tour that includes a stop at the Cine Festival San Antonio 2022. He was recently inducted into the Texas Institute of Letters.